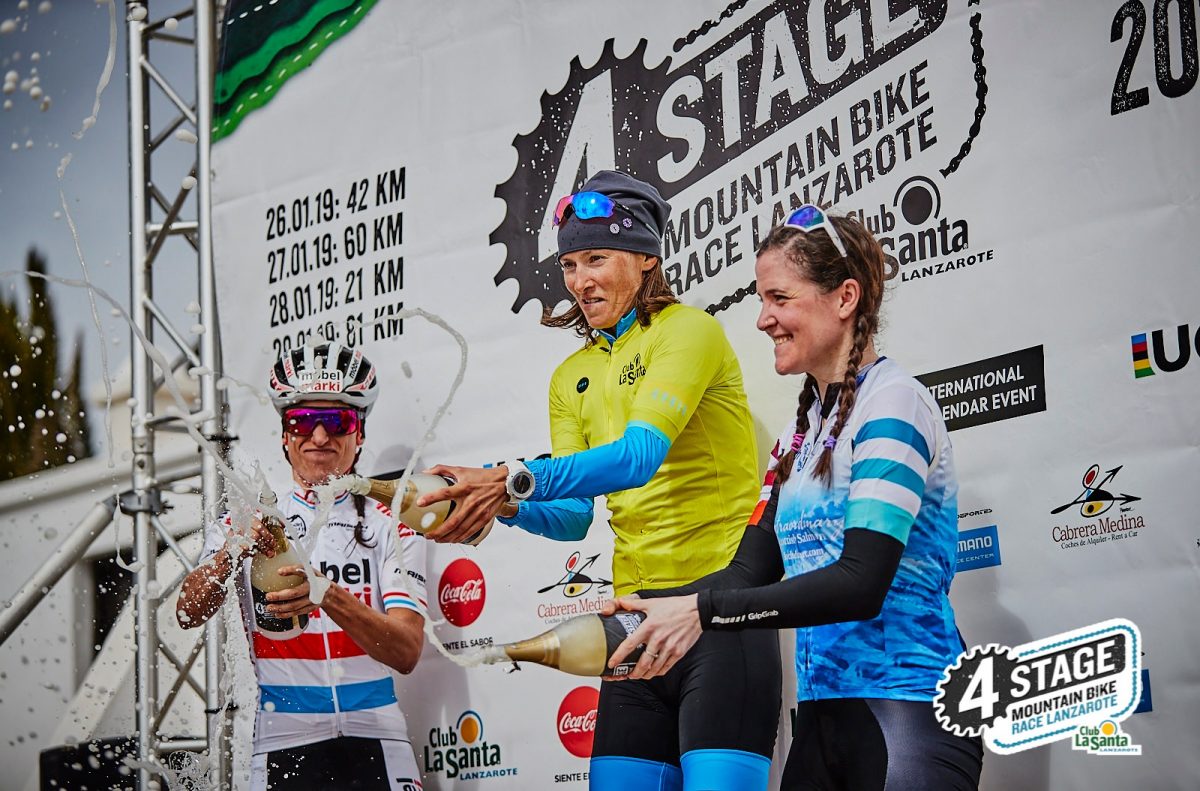 Stage 1 was a 42km stage. I’d been warned by my friend Isla who’d raced this the previous year that riders go pretty hard on this stage and she was right… it was tough! The master’s men get set off a minute behind the women and as soon as the fastest of the masters caught us, it got really risky and the pace was ramped up. I stuck with the lead group of women for most of the race but about ¾ of the way through, I reminded myself I had three more days to go, so I backed off a little to ride at my own pace. In the end, I finished 7th with less than 90 seconds separating 2nd to 8th so it was a tight finish. It was hard though and I really felt the lack of speed in my legs, but again, a quick mental check in to remind myself it’s only January and I’m not supposed to be speedy yet. I still felt anxious that I was out of my depth and pretty insecure about racing. Stage 1 took 1hr 45mins.

Stage 2 was a longer day in the saddle at 62 km. My twin Jennifer headed for the feed zones with bottles and gels for me. I settled into a pack with three other girls but halfway through the stage, I looked behind me to find I’d dropped the two girls, both of whom had podiumed the previous day, and I was suddenly sitting in 3rd position! Isla had been right… going so hard on day one isn’t indicative of a strong stage race performance unless you can back it up from day to day and I was still maintaining a comfortably hard pace.

With 10km to go, I caught Danish rider Malene Degn in 2nd place but she got the better of me during the last 1km and finished 8 seconds ahead. I was quite shocked at finishing on the podium but chuffed to pieces too and it gave me a good wee boost. I was starting to realise that despite the lack of outdoor riding, the turbo had made me very ‘pedaly’. You don’t coast on a turbo and I’d followed a structured base plan and actually it was working well for me. Today’s finish moved me up to 4th overall in General classifications with just a few seconds separating Malene and I overall. Stage 2 took approximately 2.5hr.

Stage 3 was an uphill time trial. Again, I was anxious about this stage as I haven’t done a lot of outdoor riding so was worried about my climbing ability. The format for the TT was to set women off at minute intervals with the fastest off last. I was off 4th last and on the brutal and windy ascent, caught a few girls ahead of me. This kept me digging deep and engaging my pedalyness. It was quite a cold day and chilly on the coast where we started but even just at the top I was caught by the lead girl Blaza who must have put in a storming time. The wind at the top of the ascent made for a chilly wait but a worthwhile as I discovered I’d finished 3rd again! Again, I was really shocked at the outcome and couldn’t quite believe what I was managing to get out of my body. The previous day, the event organisers had written in their report that I was a surprise podium finisher and hadn’t even mentioned me in the stage 3 preview so I think they were as surprised as me! Stage 3 took just over 1hr.

Going into stage 4 and the longest day of 83 km and over 1500m of ascending (Ben Nevis is 1345m high), I’d say I was starting to gain a bit more confidence. I’d already more than surpassed my goal of getting a training block in so whatever lay ahead was just a bonus. I was still 4th in General Classifications but with only one second separating Malene and I. Fabienne in 2nd place had about a minute and a half on me, while Blaza in 1st place was more than a few minutes ahead.  For the first 40 minutes of racing, the girls (besides Blaza who was already off) were very tactical with nobody willing to sit on the front and in the wind. I felt surprisingly good and was happy to do the legwork, occasionally jumping onto the wheel of a faster Masters rider and getting a bit of a tow. It’s not usually wise to sit out in the wind but it played into my hands nicely as I got a good gap on a very sketchy and loose descent and latched onto a group of masters men ahead, separating myself from the women. I knew this was my chance to get a gap so I worked hard for a while, making sure they couldn’t catch and just kept my pace high throughout. It was an odd feeling seeing the 3 km countdown and realising that barring any mechanicals, I was going to finish 2nd on the day. I honestly have no idea where this performance came from and how I pulled this out of the bag but finish 2nd I did, and with over three minutes to 3rd, it moved me into second place overall on General Classifications. Shocked and emotional are understatements for how I felt. The women I was racing against are fast! They were likely doing as I was doing and getting a good block of training in too but never did I expect to be on the podium. I was interviewed shortly after finishing and the interviewee asked- who are you? I don’t recognise your name, where did you come from…?! So they were as surprised as me. 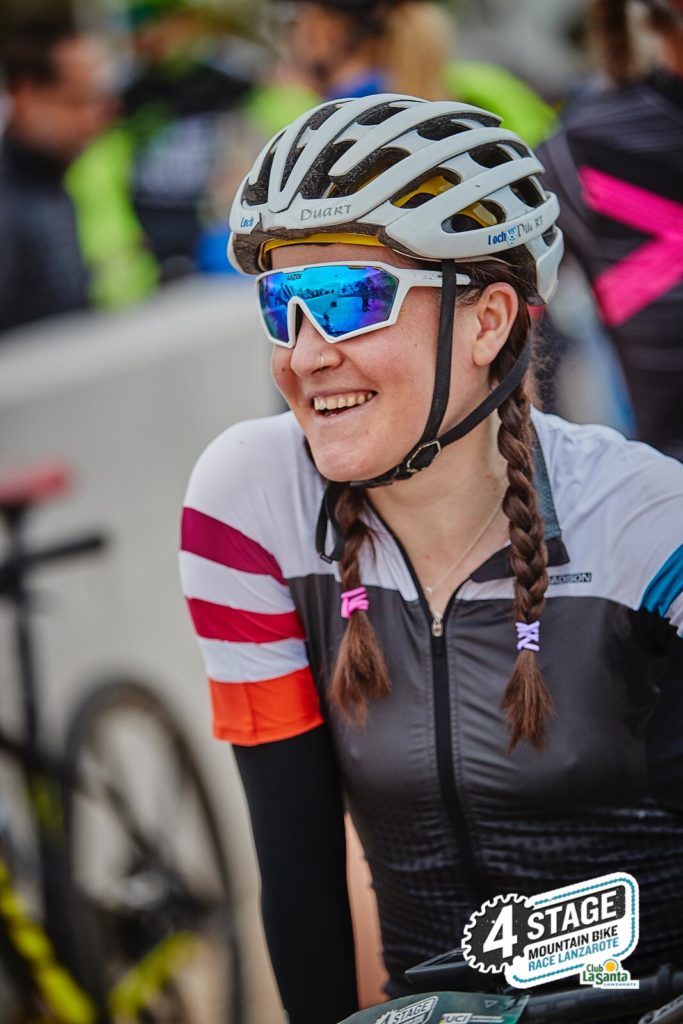 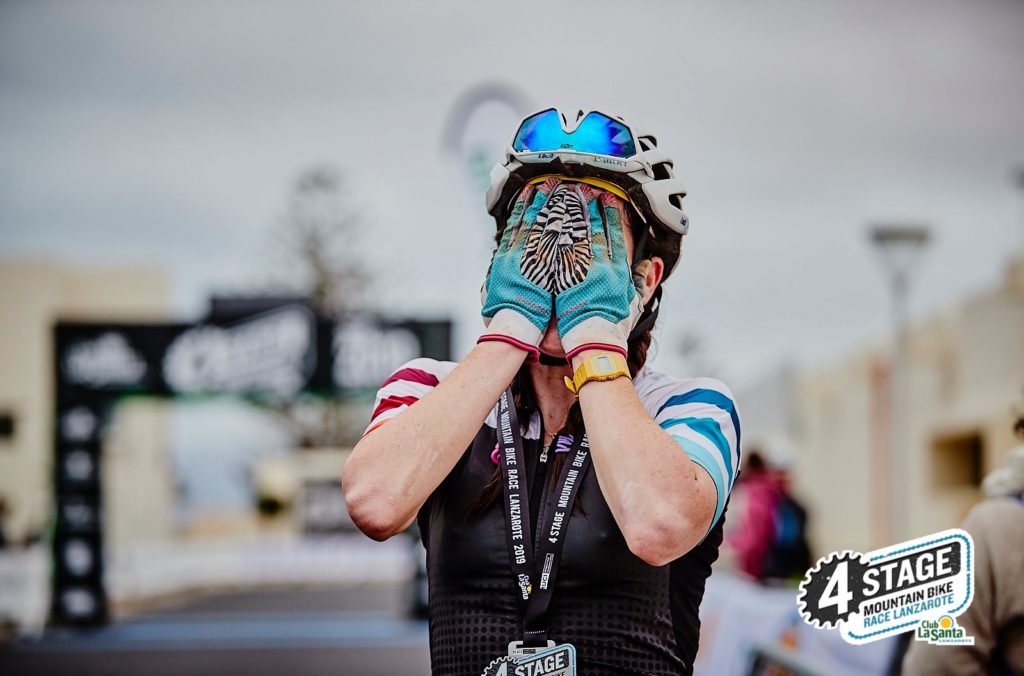 There are some things I can point to that may have helped my performance. Firstly, having my sister there in the pits and helping with driving etc. really allowed me to focus solely on just racing and recovering. This was brilliant and I’m so so glad she came with me. I don’t know how I got away with it before being on my own! Secondly, in an attempt to stay on top of myself health wise, I’ve been really paying attention to nourishing my body. I enjoy cooking and eating healthy food but sometimes I get sidetracked by trying to be as light as I possibly can and this manifests itself in a pattern of carb avoidance. However, I read a book called the endurance diet and it really brought home the importance of carbs in the diet of an endurance athlete so I’ve shifted my focus from trying to be light to trying to be nourished.

On reflection, as the season goes on I start to get quite unhealthily preoccupied with weight and start restricting the very food that fuels me, leading to a lack of consistency in my races. It seems so obvious now but I’m very much making a point of making my diet carb rich now and being able to race while appropriately fuelled. I also shouldn’t have been so worried about my lack of outdoor riding given its still very early season. I’d describe my racing as ‘one-paced’ right now but this was perfect for stage racing so long as I didn’t slow down which it seems I didn’t! Finally, just having the support of my sponsors is a real drive for me. I want to make my sponsors, supporters, and followers proud, I want to perform and race with integrity. This also gives me the grit I need when it feels like life is throwing everything at me. If it wasn’t for bikes, I’d be pretty lost right now and I’m grateful and thankful for the opportunities I’m afforded to continue pursuing this beautiful sport. It really is amazing what you can get out of your body when you allow yourself. Shocked but absolutely delighted at how my opening race has gone.