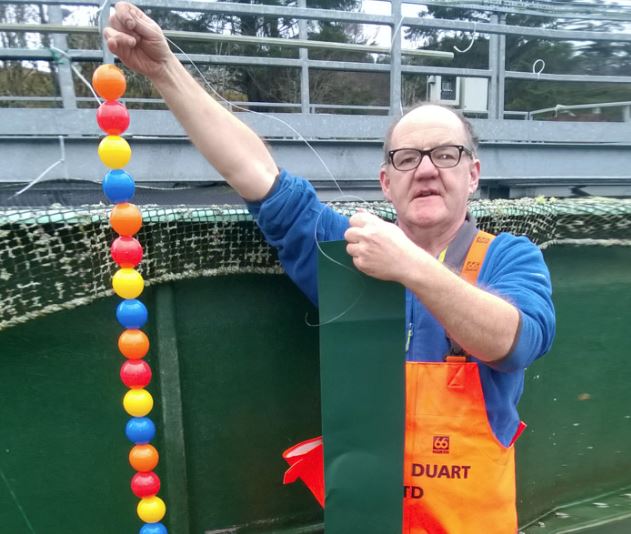 In general, people are much more aware of the issues of farming animals on land than they are in aquaculture – not surprisingly perhaps, as aquaculture is a young and still developing industry. Behavioural issues like tail biting in pigs and feather pecking in hens are well understood and extensively researched.  A similar issue occurs with salmon and Loch Duart, encouraged by Stirling University, is addressing this and coming up with some innovative ideas to improve fish welfare still further.

Young salmon in hatcheries have been observed nipping the fins of other salmon and, uncontrolled, the damage can have a serious long-term effect on the health and quality of the fish.  It is widely accepted that fin damage is an indicator of poor fish welfare but, until now, no new strategies which address the problem have emerged.

We know that most fin damage in freshwater salmon, and especially dorsal fin damage, is due to fish biting each other.  Overcrowding is another cause.  Initially the assumption was that the biting was simple aggression but, looking more closely at the behaviour, it is clear that it is different to other aggressive interactions between the young fish.

One major cause of biting is interruptions to feeding, either accidental or intentional which make the salmon hungry and aggressive.  Other factors such as low water current and higher stocking densities can also contribute.  But, could this also be linked to other behavioural issues, even boredom?

So, when the Loch Duart team started to look at this, we started with both anecdotal and experimental information showing that a consistent and adequate feed supply reduces the amount of fin damage but does not eliminate it.  We then evaluated other possible causes, ensuring adequate directional flow of current and maintaining our low stocking densities.  Even so, this did not deliver the solution we wanted leading us to the key question “what causes fish to bite each other and how do we stop it?”

In his left hand he is holding a piece of tarpaulin strip and in his right a line of brightly coloured balls. The tarpaulin is hung in the tank to give the fish a place to hide.  Hiding is a natural instinct essential to survival for young fish and now they are able to fulfil this.  Hiding also gives a measure of protection against ‘bully’ fish – the major biting culprits.  The balls are for a slightly different reason.

All animals play and salmon are no different. This can lead to behavioural problems with the dominant fish nipping the dorsal fins of their tank mates – a sort of fish tag game with consequences. Once this behaviour starts, it is very hard to stop. The balls are points of interest and items for the salmon to play with and around – and it can now be confirmed that they do, breaking the pattern of endless aimless circles.

David Roadknight and his team at Loch Duart’s hatchery in Sutherland came up with these innovative ideas to transform the tank environment and to give the fish a better life whilst reducing behavioural issues. It is wonderful to be able to confirm the interest of Stirling University to evaluate this approach though it is already clear to us that it changes the swim patterns in tanks and dorsal fin quality already seems to be improved.

Jimmy Turnbull BVM&S, MSc, PhD, MRCVS, Professor of Aquatic Population Health and Welfare at Stirling University said: “This is obviously a very small study and you cannot extrapolate too far from it – but the fish in the tanks with enrichment apparently have better fins and this is very promising”.

Alban Denton, Managing Director of Loch Duart, commented “Loch Duart is committed to the best welfare achievable and David Roadknight’s innovation has the potential to improve the welfare of salmon in hatcheries significantly. Good welfare is exactly why Loch Duart salmon is renowned for its fine taste because we know that welfare and taste are inextricably linked”.

Back in 2005, when we won ‘Gold Award – Best Food’ in the first Daily Telegraph/Sainsbury’s ‘Taste of Britain’ Award, we made a statement about our welfare policies which made the headlines.  ‘Fish can be happy too…’ it read – and in this dynamic young industry, we are still learning how best to achieve this.