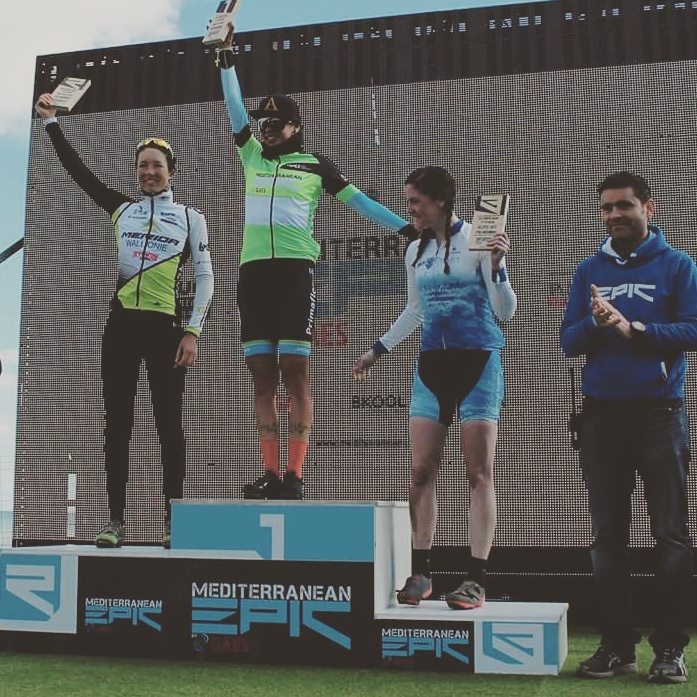 I’d made it to the final stage…woohoo! Today I woke up in a good bit of discomfort- the bedsheets were sticking to parts of my road rashed body and I felt very stiff and sore. This was going to be the shortest stage in distance (55km) so at least I had that comfort. I also had the added challenge of tracking down the stranger I’d given my Loch Duart jacket to on the start line. Perils of solo racing!

The start to this stage was the same as stage 1- the brutal steep climb… urgh! Having studied the results and timings the previous night, I could see that in general classification, the first place girl had minutes on me (Olympian and Number 8 in the world so no surprises there), and there was about 4 minutes from me to 3rd place. Nothing to lose right?! I was keeping very good company and riding against very experienced girls who on paper were ranked much higher than me so I decided to give today everything.

Of course my goals had evolved and changed and I really wanted to hold onto that podium place. As soon as the gun went, I went too and tried to stay as close as possible to the front girls. Though shorter in distance, today the climbs were relentless and STEEP! Feeling sore and tired, I started to lose touch with the front girls early on but kept telling myself I had 4-6 minutes to play with to hold on to a podium. With every relentless climb came a spectacular descent and I really pushed on here, hoping other girls were making mistakes on the tricky sections that I was somehow managing to navigate confidently despite the fatigue and pain from the previous days crashes.

I pushed on as much as I could on the climbs and really felt myself start to blow more than once. As each feed station approached, I greedily gulped down glasses of coke and water before trying to make up lost time. I was sitting in fourth place for most of this stage but the last long steep climb really nailed me. We had ridden from sea level up and over a couple of 400m peaks but the last peak climbed to 700m with the nastiest, steepest section to finish. Here there was a crowd gathered cheering each athlete on as they hauled themselves over.

I was so close to getting off my bike and pushing, it was that steep and uncomfortable so I’m glad the crowd were there to shame me into staying on my bike! At this point I was caught by 2 girls who had ridden smartly and as we crested the top together, I had to slow down to bring up the coke I had greedily consumed… such a hard climb that it actually made my sick. The only thing left was the long descent back to sea level and along the coast from Benicassim to Oropesa del Mar.

Having recovered from my momentary blip, I started descending like my life depended on it…quickly passing the 2 girls that had caught me and picking off the masters men. It was brilliant! Rocky, loose, slightly scary at points and wild- I was in mountain bike heaven. I kept thinking the whole time that the 2 girls ahead could be only 4 minutes away from me so I had to keep pushing. Disaster struck again however as my wild riding caused me to ding my rear wheel rim off a rock, puncturing the tyre. I had no gas on me (confiscated at the  airport) so I was shouting at everyone who went past me if they had any.

The 2 girls went flying past (of course they didn’t stop) and eventually I started walking down the trail, still begging people for gas. Further down, there was a Kazakhstani rider by the side of the trail inflating his own tyre and he lent me some of his gas which fortunately was enough to re-inflate my tyre and get me back riding. I rode the last of the descent conservatively and once on the coast, rode as hard as I could to minimise the damage. I was exhausted when I crossed the line with still no idea how far back I was!

It’s an emotional feeling conquering anything in life and I felt just like that crossing the line… In utter disbelief at how I had coped and raced, feeling overwhelmingly privileged to be doing this and absolutely bursting with excitement to update those who helped me get here. I couldn’t believe I had done it on my own either… I felt like I’d won the race in that moment! Whatever the outcome, I knew I had exceeded my own and other people’s expectations and I had to be content.

Finally, it was confirmed I had finished 4th. No podium, a few moments of self-pity followed absolute pride at the outcome. Looking at the results afterwards, I’m pretty confident my flat tyre wouldn’t have made a difference to the results. The 3 girls on the podium absolutely deserved to be there and had ridden smartly, with commitment and heart. The learning I took from this experience will put me in good stead for the start of the cross-country season, the event will have given me a great fitness boost and mentally, all I can think is bring it on!

I owe a huge thank you to Loch Duart who made it financially possible for me to do this race. The icing on the cake was getting my Loch Duart kit on the podium in my first international event of the year.

Kerry MacPhee is a professional mountain biker from the island of South Uist in the Outer Hebrides.  The first woman athlete to represent the islands in the Commonwealth Games – and only the second islander to be so honoured.  Kerry Macphee receives financial and dietary support from Loch Duart Salmon in her attempt to win in the mountain bike event in the European Championships in Glasgow August 2018.