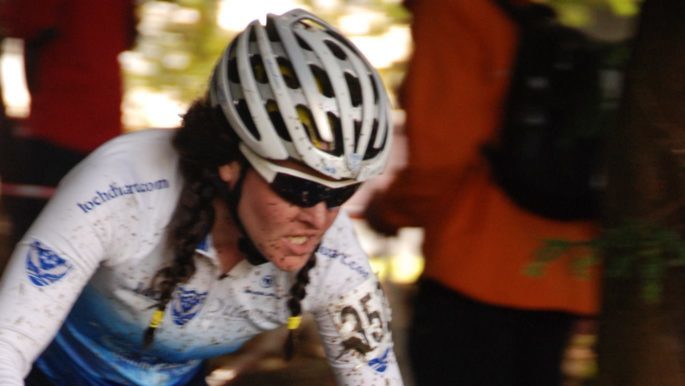 Now that mountain bike season is over, most cyclists turn their attention to cyclocross which has a thriving scene in Scotland with around 600 people competing in each Scottish series round. A cyclocross bike looks like a road bike but has knobblier tyres and more mud clearance.  Women’s cyclocross races last for around 45 minutes and are made up of approximately 6 laps of mud, grass, hurdles, sometimes sand, hills, more mud and the occasional stretch of tarmac.

Cyclocross races are usually spectator friendly and the age categories range from kids right up to Vet 50, so anyone can participate. It’s been almost two months since I raced last and in that time I’ve been busy completing filming of a BBC Alba cycling documentary coming out next year.  I sat out of the first two rounds of the Scottish cyclocross series due to filming and a virus, however i was eager to get racing to the third round at Fife College, Dunfermline.  I don’t actually have a cyclocross bike so rather than not compete, I had cyclocross tyres put on my mountain bike and decided to race that.  I also thought that racing on a mountain bike meant that I had a ready made excuse if I have a poor performance whilst I get back into training.

Well, it seems you can’t always blame your bike… and I was clearly hungrier than I thought to race hard. Despite being gridded near the back of the race, it took me a minute to work through the girls and take the lead and I never looked back! I was shocked to be leading, as were the people watching, to see the leader on a mountain bike rather than a cyclocross bike… what feeling.  It was a super tough course with really thick mud in parts which required a real strength effort to get through and miraculously I managed to get around every lap without putting a foot down, except to get over the hurdles!

I am absolutely delighted with my return to cyclocross and I am most definitely fired up and motivated to do well in the upcoming series races. I also really hope that any children spectating saw me racing and winning on board a mountain bike.  I hope they realise that you don’t always have to have the lightest and latest equipment to participate, or even do well. Life is going well right now and I think it showed in my racing over the weekend. Next stop is Fife again at Lochore Meadows in a fortnight.