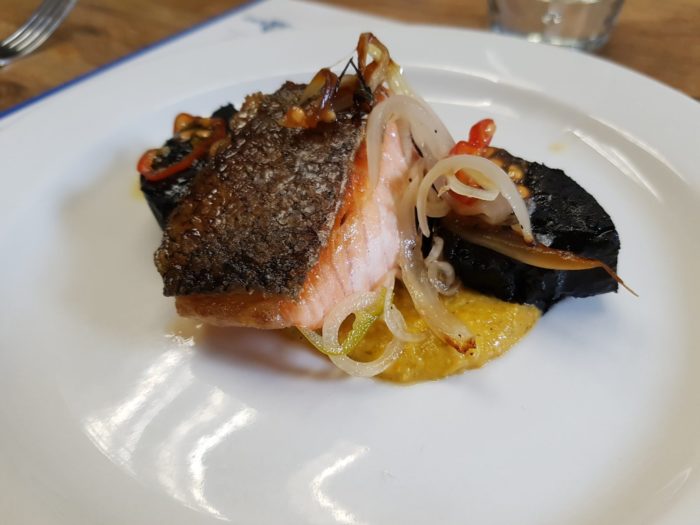 Loch Duart Seared Salmon
Temper Loch Duart Salmon to room temperature. Heat sauté pan over medium high heat. Add grape seed oil. Season with salt and place in hot pan. Allow to cook until the Loch Duart Salmon has a good sear and will release from the pan on its own. Flip with a ﬁsh spatula and add the butter. Tilt the pan and glacage (baste) with the butter. Allow the butter to brown while basting. Immediately sprinkle a pinch of ﬁsh spice on top of the seared Loch Duart Salmon. Remove pan from heat and allow the salmon to rest in the pan with the brown butter for about 3 minutes until ready to serve. (The ﬁsh should be ﬁrm but have NO white (albumin) excreting from between the layers of ﬂesh). Before plating rest salmon on a cloth napkin for about 30 seconds to remove the brown butter and oil.

Fish Spice
Peel the lemons with a peeler and remove any of the white pith w/ a paring knife. Place on sheet tray lined w/ parchment paper and place in oven w/ just the pilot light for 3 to 4 hours until all the moisture is removed. Add dried lemon peels, fennel seed, and sumac into spice grinder and grind until ﬁne.

Fennel Puree
Pre-heat rondeau over medium low heat and then add grape seed oil. Add the julian cut onions, salt, and sweat for about 10 to 15 minutes. The goal is to cook the onion as along as possible without getting color on the onions. Then add fennel and cook for another 5 minutes. Again avoid any caramelization (color). Deglaze with the Pernod and reduce for about 3 minutes. Add cream and reduce by half. Remove from heat and place in Vita-Mix, puree with butter until smooth. Then pass though a chinoise. Season with salt to taste.

d’Espelette Oil
Place grape seed oil in a small sauce pan and mix in d’Espelette. Steep on low heat for about 10 minutes. (once oil is hot you can steep on just the pilot ﬂam or use a defuser to prevent scorching). Allow oil to cool and strain though a coffee ﬁlter. Discard the d’Espelette and reserve just the oil.

Back to all recipes