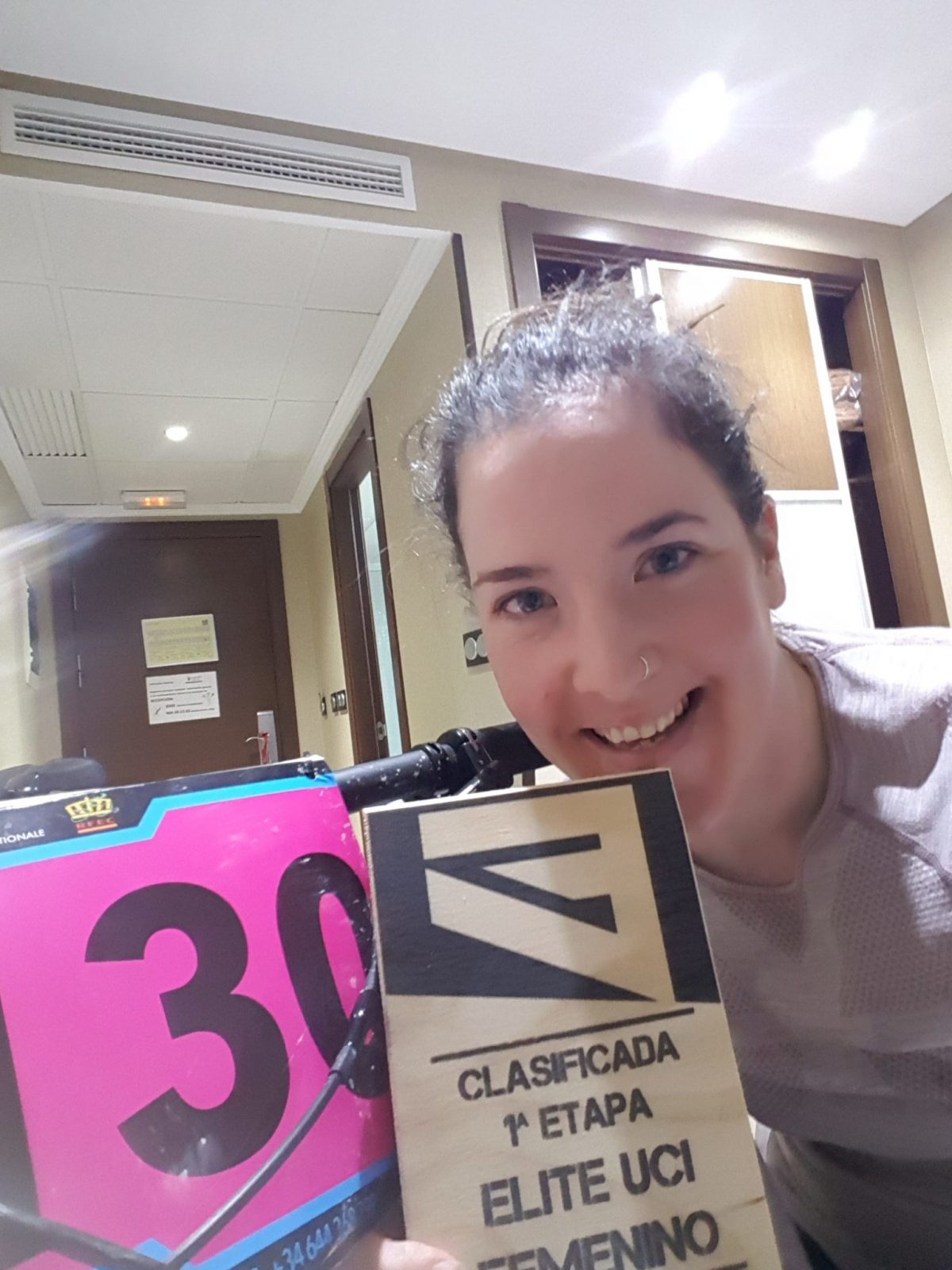 (continued from Stage one here)

Stage 2: I woke up feeling a bit stiff and sore and REALLY worried I’d worked too hard on day 1 and would find today, the hilliest day, tough. The stage started in the town of Castellon and again heading into the stunning mountains. As with stage 1, I eased (at least I thought I did) into the riding and again, started to pick off girl after girl. The terrain was spectacular- vineyards, rocky, descents and climbs, some road sections, tiny villages, dusty tracks, claggy mud and more arid and rocky terrain. With the confidence from the podium yesterday, I moved myself early on up towards the front group of girls and again after 2 hours of riding, found myself in third position with no-one around me.

The climbs were long and hard going today and on the second to last climb, I caught second place and had a minor meltdown when I realised where I was! This stage had 3 feed stations which were always a welcome refresh of sugar and water supplies… I don’t even like coke but it is a great sugar hit when racing.

As soon as I got into second, I tried to push on even more on the bike, perhaps a little too much. A lot can happen in a stage race and it’s not over until you cross that line. Heading up the last climb, I started to feel a little empty and everything was getting harder and harder… The descents had been really rocky today and your whole body takes a battering. I knew I had 1 last descent to go and a long flat section of road so I really pushed on the last climb.

As I started to descend, I realised I could barely hold onto the brakes or change gears…I’d lost the ability to work my fingers and was starting to blow.  Annoyingly my Garmin also came loose and was rattling away on my bars! I was trying to descend fast, trying to bring my fingers back to life and trying to adjust my garmin at the same time but it was just not happening! There were some wee uphill digs too and I was really starting to blow and struggle. It seemed to me when I moved into 2nd that the girl I had passed had blown too but she had found a second wind and came barreling past me. Not all lost though and still a podium within sight. I finally made it down the descent and just had to hang on for another 20 minutes of racing. I was in a lot of discomfort!

Looking behind me with about 5 minutes of racing to go, I spotted someone else closing in on me… nooo! My legs had no response and I felt like I was fighting as hard as I could but with a couple of hundred metres to go, she caught and past me to take the third spot on the podium! I was seeing stars and in a bit if a state when I finished but delighted nonetheless that my body was allowing me to compete for yet another podium. It also meant that I stayed in 3rd place overall in General Classification. 1800m of climbing and 3hr 30 in the saddle. Gubbed!