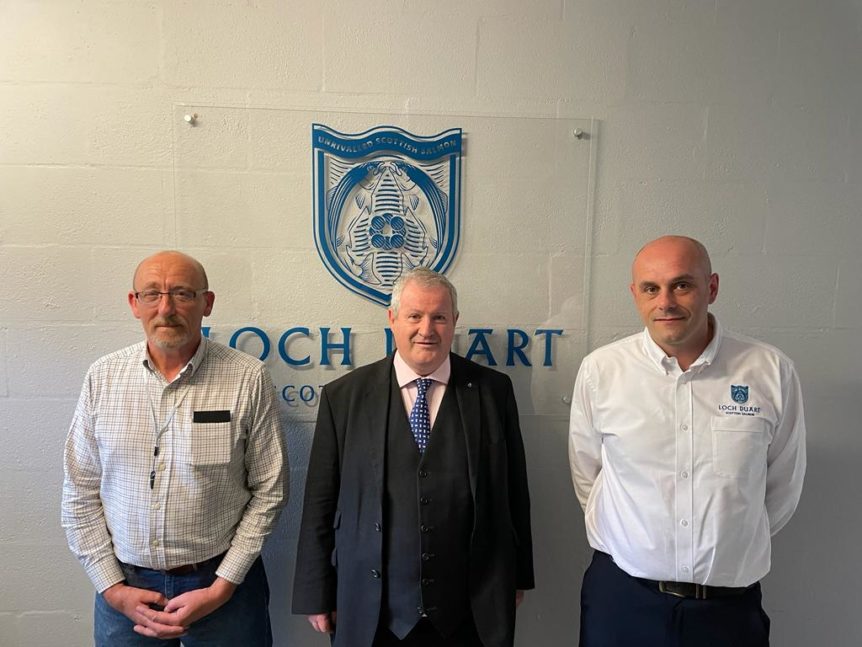 Independent Scottish salmon farm Loch Duart invited Ross, Skye & Lochaber MP Ian Blackford to its Dingwall fish packaging plant to discuss the staffing crisis facing businesses across the Highlands. Currently the SNP’s Westminster Leader and local MP for the area, Mr Blackford also found out how their salmon is prepared for some of the world’s leading chefs, hotels and restaurants on a tour of the 50,000 sq. ft. plant with Processing Director Russell Leslie.

As the local MP for the constituency Ian Blackford praised the Loch Duart’s job creation and investment in the Highlands but acknowledged the challenges the food and hospitality sector face in recruiting new staff. Despite paying above the living wage and providing enhanced conditions and subsidised transport from local areas, Loch Duart is still struggling to fill all the vacancies it has at the plant. With low unemployment levels locally, there are not enough people to plug the gap in many businesses in the area.

Loch Duart now employs over 160 people across Scotland in the Western Isles, Sutherland and Ross and Cromarty and is one of the business success stories in the Highlands and Islands.

“It was a good opportunity for the SNP Westminster leader to come to the site and see first-hand the struggles the company, like others, faces in recruiting staff. It also gave Loch Duart the chance to highlight the need for more to be done to ease labour shortages across Scotland. The Loch Duart processing plant is currently turning away opportunities because we are unable to recruit locally.

“We are rightly proud of the exceptional standard to which we can now process and package our salmon, due to the skill of the Dingwall factory team. There are real opportunities for development in jobs like those at our Dingwall factory.”

“I was delighted to be updated on the success of Loch Duart’s operations in Dingwall. The company has ambitions to grow and be an integral part of the local economy but it is clear to me that the company is being held back by inflexible immigration policies that are hampering the ability of the company to recruit foreign workers to complement the current locally based workforce.

“I will be seeking a meeting with the UK Government ministers to push for a relaxation of rules to allow overseas workers to come and work for Loch Duart to support the company in its growth ambitions.”

Raised in the rugged coastal waters of North West Scotland, Loch Duart salmon are fed a specialist diet high in marine content, leading to an exceptional tasting fresh fish, of the highest quality which is rich in Omega-3.