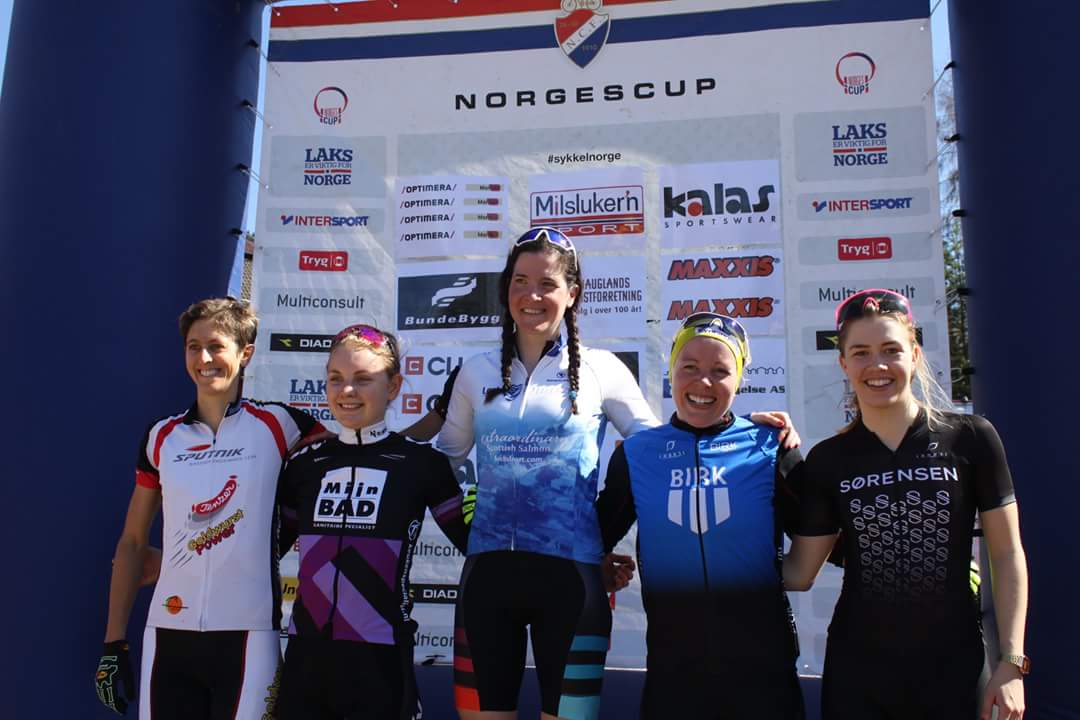 One of my goals for this year has been to work hard on my world ranking and continue my upward trajectory in the sport. I chose a stage race in Oslo as my last chunk of stage racing, coming into the XC season. It was an ideal race contrary to the previous stage races, this one was made up of 3 stages over 3 days, starting with a 2km time trial, then a 4 lap short track race and finishing with an XC race. This wouldn’t fatigue me anywhere near as much as the long days I had done in previous stage races, but would give me some valuable racing experience and a good dose of intensity.

This was a technical and intense 2.2km of racing, with girls setting off in 30 second intervals. The race didn’t start until 4pm so I had lots of time in the day to learn my lines and practice sections of the course. It was quite similar to the stuff I’d ride at home- rooty, rocky, slippy with muddy and mossy cambers. I love this kind of riding and especially like challenging courses! The lap started with a 1 minute gravel climb and the rest was just aiming to be as smooth as possible and not make any mistakes. When the gun went, I went too and just pushed as hard as I possibly could whilst being mindful of the fine balance between going fast and staying smooth. I’m getting better at not going so harem scarem, so that I don’t make l mistakes. I got through the lap relatively unscathed but still feeling absolutely burst by the end! After I’d finished, I headed off to stay with my friend Emily who lives outside Oslo and didn’t wait around for the podium as I was sure against some fast girls, I wouldn’t have made it. Much to my surprise I woke up the next day to see I had in fact finished 3rd! Amazing!

After the surprise of coming 3rd in stage 1 with barely seconds between myself and 1st place, my confidence took a wee lift coming into day 2. Today was pretty much 4 laps of yesterday’s course with a couple of variations and all girls setting off at the same time. Again, the start was a gravel climb and I made it my aim to get into the single track in the front group if not at the front. On the climb, girls were jostling for position and I felt I couldn’t risk getting stuck behind anyone slower so just went for it towards the top of the climb and entered the single track 1st. The laps were about 6 mins long, so again I pushed as hard as I could without making any mistakes. As I finished lap 1, I heard “7 second gap” and I could see a group of girls out of the corner of my eye chasing hard. I was quite shocked I’d got this gap in the first lap! I hit the gravel climb again, pushing as hard as I could and really working so hard not to make any silly mistakes in the technical sections. On coming through the finish arch a second time, I heard “8 seconds”… and all I could think was “don’t make a mistake”. By this point, I was starting to enter a whole world of discomfort and suffering and I was really having to dig deep. I could still see a group of about 4 or 5 girls out of the corner of my eye and it felt like they were catching me and I started to panic that I’d gone off too hard. With 1 lap to go, I heard “7 seconds” which really is not a lot of time at all. By this point I was thinking- just one more lap, you can do it! I clung on for dear life, every muscle and breath hurting like hell. Up the last wee dig, I put in a massive effort, making it to the corner and crossing the line as the stage winner- woohoo! Quite possible the most painful 24 minutes of racing I have ever done and not 1 second of it was enjoyable with a group of girls chasing hard, but man was it an amazing feeling to have held them off! With bonus seconds on every lap, today’s win moved me firmly into the leaders jersey.

I think I’d said coming into this race that a top 10 would be ace, and it’s funny how your goals adjust. My racing and training has been consistent this year and it was showing even in the first 2 stages. I always struggle with my head too, so it was a real confidence boost for me and I wasn’t allowing myself to feel intimidated by the girls around me. I decided to carry that attitude into the final day, and with over 30 seconds between me and 2nd place in the general classifications and over a minute and a half to 3rd, I just had to race smartly and keep the gap between myself and Swiss rider Katrin Leumann below 30 seconds. The course was longer than the previous 2 days with longer gravel sections, a long technical climb, and a few more features including a gap jump. Much to my surprise it was myself and a Swedish and Dutch rider that rode away from the group, putting over 1 minute into everyone in the 1st lap. I led out for most of the 1st lap before sensing the effort of yesterday in my legs and settling into the group. I had over a minute and a half to play with and after a couple of laps, we seemed to hold 20 second gaps between us. For the first couple of laps, I was riding in disbelief that I could still feel strong and consistent… until disaster struck! I went over the gap jump and landed awkwardly on the other side, flipping my saddle upwards. I always carry tools in my pocket just incase, but have you ever tried using an Allen key when your heart rate is sky high…it is tough! Eventually I got the saddle sorted, still in 3rd place and continued to pedal but this time, I’d flipped it too much and it was pointing downwards. I had no choice but to stop and start the faff again, still struggling to get the correct size Allen key and sort the saddle. I must have been passed by about 5 girls at this point! The 2 stops had given me a bit of a rest so when I jumped back on the bike, I was able to push hard and start catching girls. Coming into the final lap, I had made up two or three places and was now riding in fourth with Katrin Luemann on my wheel. I must have lost between 2 and 3 minutes so I knew 1st and 2nd place were long gone but I buried myself to try and get a podium finish at least. I made it to within a whisker or 3rd place, finishing the final stage in 4th but this also gave me a 3rd place finish overall. As gutting as it was to lose the overall win to such a silly mechanical (it isn’t the first time I’ve had  issues with the saddle), I had to really work hard to have some perspective on the race and appreciate that I’d far exceeded my goals and expectations. All in all a pretty cool result, a pretty cool experience riding in the leaders jersey and a nice wee haul of points! Norway I’d say was very good to me!

Kerry MacPhee is a professional mountain biker from the island of South Uist in the Outer Hebrides.  The first woman athlete to represent the islands in the Commonwealth Games – and only the second islander to be so honoured.  Kerry Macphee receives financial and dietary support from Loch Duart Salmon in her attempt to win in the mountain bike event in the European Championships in Glasgow August 2018.