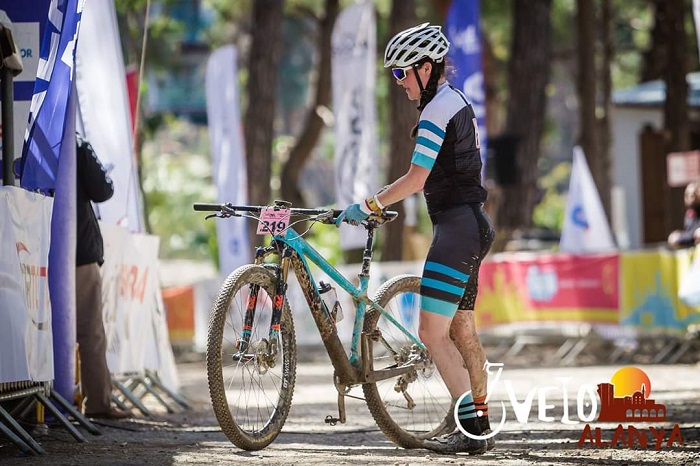 In keeping with my early season logic of using stage racing as blocks of training, I signed up to do the Mediterranean Epic 4 day stage race in early February. This had been my first ever stage race last year and it had been one of the most challenging and overwhelming racing experiences I’d had to date and I felt it had really given me a great fitness boost ahead of the XC season (you can read my blog on last years Med Epic here). It brought some comfort too knowing I was familiar with the race and what it would entail. Last year it had been an ‘S2’ class but this year it had been upgraded to ‘S1’ meaning more UCI points up for grabs and thus more riders and more depth to the field. The race was approximately an hour north of Valencia in a seaside town called Oropesa which was a complete ghost town. It is a seasonal place and everything was closed, just like I’d remembered! There were plenty water parks, signs for eateries, garish plastic ornaments and unlit neon arrows but barely a soul to be seen. However, it was clear that in the height of summer, the beach fronts and accompanying entertainment would be awash with visitors. In February though, the mornings were still below 5 degrees and the clear blue skies meant that though a pleasant low teen in temperature for me, perhaps not so conducive to topping up tans!

Whilst my goal for the first stage race of the season had been to just get a good training block in, the surprise 2nd place finish and accompanying stage podiums had given me a renewed vigor and determination and perhaps a much-needed confidence boost. I’d been so worried about getting back into international racing without Lewis so it had been a big hurdle to cross but I’d done it. He may not have been by my side but he was certainly with me. However, I couldn’t help but allow different anxieties to creep in this time and they were- how will I cope if things go wrong, or will I cope even?! It’s all well and good when things go well but bike racing isn’t linear and life most certainly isn’t. I was approaching this race a bit more differently to Lanzarote …. yes, I knew it would be a great training block and I kept reminding myself that that’s what it would be, but perhaps I could aim to get a good result in too?!

The first hurdle was trying to find someone to come along with me to be my support in the feed zones, help with driving, go along to race meetings etc and having learnt in Lanzarote what a difference having a support person makes, I decided to use my prize money from Lanzarote to pay someone’s way. My sister Jennifer who’d been brilliant in Lanzarote was away with work, and friends and family with a bit of flexibility in their schedules were also unable to come (a week away is a big ask!). With a week to go, I still didn’t have anyone so, as you do on a whim, I posted in the Scottish Cyclocross facebook group asking if anyone fancied a free trip away to be my support and in exchange, they could get their own training in in the afternoons. The Scottish cycling community is amazing as I’ve found out many times before but I honestly thought I’d be lucky if 1 person was able to come at such short notice, never mind the dozens that got in touch… overwhelmed was an understatement! Being around elite athletes and races like the Mediterranean Epic is an amazing experience for someone who loves cycling. You’re up close and personal with some incredible riders, you’re seeing the ferocious speed of the riders as they pass through the pits, you’re in and amongst it and its exciting! Well, in my opinion anyway ☺ I wasn’t sure how many other people get as excited as I do to be around this so I was glad to see I wasn’t the only one ☺ I went from feeling like I’d be lucky to get 1 person who had the time and inclination to come and be my support to feeling quite bad at having to let a lot of people down but also grateful to know there were people out there who are as up for a wee adventure as I am. Within about an hour of posting, the very lovely Emma who I shared a few mutual friends with and vaguely recognised from my triathlon days was my support for Med Epic. She happened to have that week off work while her husband was away with Lewis’ brother Evan coaching so it was a lovely coincidence and she brought a lot of experience from her own racing too. I met her properly at the airport just before we set off and could tell immediately she was a warm and easy going individual so I was chuffed to have her come along.

I guess you could say that it was approximately 3 hours after Emma and I met that we were faced with our first challenge of the trip. It’s every cyclist’s worst nightmare en route to a race for their bike not to appear, though unluckily this is what happened. We had no choice but to try and make alternative arrangements. At sign on, I went around all the pro team tents asking if they had a spare bike I could borrow (nope), I asked the race organisers if they had anything and then Emma and I went around a few bike shops in the neighbouring towns asking if they had anything we could rent. We mostly got maybes, come back after 5pm until eventually, one of the race organisers got in touch to say his friend who was racing had a bike which belonged to his wife that I could borrow. Woohoo, at least I’d get to start the race! Experiencing the kindness of strangers is just the loveliest feeling ever. Finally, we were set to go! Read how the race went here.