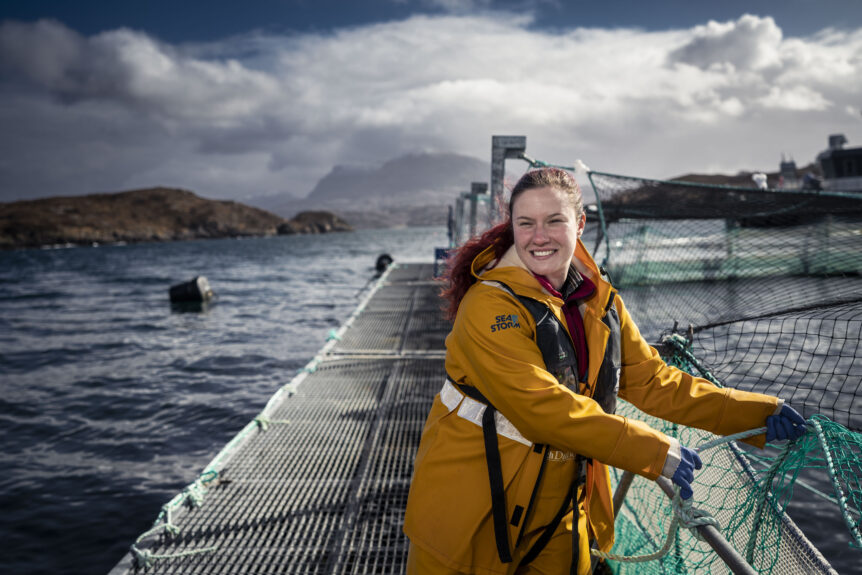 Scottish salmon farm Loch Duart has just agreed a programme with the West Sutherland
Fisheries Trust (WSFT) for the monitoring and auditing of its weekly sea lice count activities and
the resulting data. Loch Duart enjoys farming some of the oldest salmon sites in Scotland from
their base in Sutherland, North West Scotland. Badcall Bay, home to their head office, has
been farmed since 1975. The WSFT, established in 1996 to monitor and protect wild fish stocks,
uses scientific programmes and guided fishery management plans which have a significant,
positive impact on wild salmonid populations in the area.

Loch Duart partnered with the Fisheries Trust in 2018 on the sea trout tracking project in Loch
Laxford and is now inviting Trust biologists onto their sites to monitor the farmed stock health
checks, involving sea lice monitoring.

“This independent audit fits Loch Duart’s policy on stewardship of the environment and
transparency to local stakeholders,” stated Mark Warrington, Loch Duart’s Managing Director.
“The initiative is a continuation of our support for all bodies involved in caring for the local
environment.”

“We believe that being able to observe routine sea lice counting on a regular basis on farm sites
will allow us to comment objectively on the quality of the lice data that is being submitted. It will
also help us to better understand what is happening in our sea lochs and what the level of
potential lice impacts on wild fish might be.”

The levels of sea lice on Scottish salmon farms including Loch Duart’s, have been published on
a voluntary basis through the SSPO since 2013 with details on a site-by-site basis being
available since 2018. At the end of March 2021, it became a statutory requirement for farmers
to report lice counts to Marine Scotland on a weekly basis, no later than one week in arrears
when the Fish Farming Business (Reporting)(Scotland) Order 2020 came into effect.

The procedures for counting sea lice are laid out in the industry’s Code of Good Practice and
Loch Duart’s farm personnel are fully trained in this procedure and in the correct identification
of sea lice and their various life stages.

Despite this ever-increasing level of transparency on data and long-established industry
routines, there have been criticisms that the counting of sea lice by farmers themselves lacks
independence. Some critics claim that the reported data is not wholly reliable. The new auditing
provided by WSFT is a further commitment from Loch Duart which underlines their belief in the
transparency of health check monitoring, and the importance of the reliability of sea lice data
submitted to Marine Scotland. Whilst the Trust receives funding for its service work it is
independent of those for whom it provides services.

Trust biologists will:
• visit 4 different Loch Duart farm sites each month to observe the routine, weekly sea lice
counts being carried out
• monitor the procedures being followed and the recording of the results
• review the data from all sites to establish consistency with the findings at visited sites,
given the prevailing environmental and biological conditions

The Trust will provide Loch Duart with a monthly report on their site visits and findings which will
be published on both the Loch Duart and the WSFT websites.